Alfred Lord Tennyson as a representative poet who is known as a Victorian poet whose poetry is the philosophy of faith and hope enriched the spirit of our complex modern civilization, culture, art, and criticism. The age where Tennyson lived is known as an age of “industrial revolution”. As a result of the industrial revelation, the economic condition of the people improved. This improvement brought about a change in man’s outlook. Some people looked upon wealth as an end in itself. People ad-heard to traditional values like wisdom, justice, truth, patriotism, public welfare. Some people claimed to maintain the traditional social order where women were considered inferior to men.

At the time new discoveries were made. They were against the truths of religion. Religion taught that God is the creator of the world as well as life. But scientific discoveries proved that the world and life were created in the course of time, not at a particular time. Tennyson gives expression to the scientific spirit of the age. There is something universal in his poetry that has an appeal to all hearts-ancient or modern.

In the poem “Morte D’Arthur”, the poet narrates the last moments before the death of King Arthur. King Arthur represents “the soul at war with the senses”. His trusted knight Bedivers asks how he will be able to live “among the new men, strange faces, other minds”. Arthur advises him to accept the change as the expression of God’s will. He says in this poem:

And God fulfils himself in many ways”

Arthur tells him to pray to God. God will show him the right way. Here Arthur’s knight faces a conflict in his mind between his desire for wealth and his loyalty to the kings.

“Oenone” is one of the remarkable poems by Tennyson. In this poem, Oenone laments her betrayal by her lover Paris. Paris was lured by physical pleasure only. He underrated the purity of her love. His disregard for Nobel ideal caused sufferings to her. Paris rejected the offer of power that knowledge gives. Oenone echoes the poet’s view when she speaks of the words Pallas-

The relation between man and woman and the status of women was a burning issue in his time. A group of people demanded women’s equality with men. They wanted equal rights of women in education and in other spears of life. But Tennyson was conventional in outlook. He was a conservative in outlook and was not in favor of any revolutionary change. He examined the matter in his long poem “The Princess”. In it, he tried to show that the existing system should continue. He declared in this poem:

Man for the sword and for the needle she

Man to command and woman to obey.”

The Victorian who upheld moral virtues in domestic life was heart moralistic. In this respect, Tennyson is the mouthpiece of the Victorian’s. In this respect Tennyson poetry there is a strong feeling for moral teaching and ethical edification. He turned to the Greek legends not so much for the sake of their beauty as for their ethical significance. The legendary “Ulysses” imparts the massage of action urges the readers:

“To strive, to seek, to find, and not to yield”

According to Tennyson, God is both human and divine. The human will is free. Only God can fulfill the wishes of human beings. It is God who is the chief source of all knowledge and light. Tennyson says that memory on earth may grow faint and broken, but in the next world, the memory will appear vivid. The two voices of that century are perpetually heard in this his Masterpiece “In Memorian”.

In “The Ancient sage”, we may see how the poet challenged the current materialism and asserted the eternal verities of God and immortality:

Believe me than in half the creeds”

“Locksley Hall” is a remarkable poem among Alfred Tennyson’s poems that reflects Victorian culture, belief, science, and religion. In this poem, Tennyson expresses his attitude towards science and human progress. The speaker in this poem is a jilted lover. Once he had a love affair with his cousin Amy but later Amy abandoned him to marry a rich man. According to the speaker, she married a man of lower feelings and a narrow heart. The speaker criticizes the social environment that makes such unmatched marriage possible.

The speaker describes the vision of the world that he used to see in his younger days. People are greedy and are driven by commercial motives. Money rules the world. According to the speaker, a woman’s brain is less developed than a man. The speaker thinks to set himself free from the limitations of his present life.

A note of melancholy is seen in this whole poem. He does not like commercialism. According to him, wisdom is slower in coming to us that knowledge. Wisdom and knowledge differ. Knowledge means acquiring more facts and more information about the world but it is wisdom that gives us the capacity to make proper use of those facts and information. The speaker says:

“Knowledge comes, but wisdom lingers and I linger on the shore

And the individual withers and the world is more and more

Knowledge comes, but wisdom lingers and he bears a laden breast

Full of sad experience, moving towards the stillness of his rest”

To sum up, we may very firmly assert that Tennyson presented in this poetry all the essential features of Victorian life. So Tennyson as a representative poet is well recognized. The ideas and taste the inherited predictions belonging to his class and generation, moderation in polities refined culture, religious liberalism checked by doubt a lively interest in the advance of scientific discovery attachment to ancient institution all Victorian feeling find expression in Tennyson Poetry. 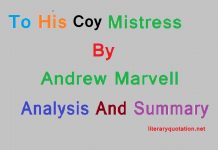 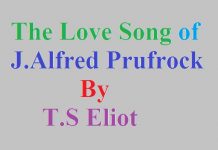