The following article is about Robert Frost writing style or poetic styles and themes. You also will know about the dramatic technique of Frost poetry

It has been rightly said that the poetry of Robert Frost are basically dramatic in mood. The bulk of his poetry is a dialogue between the two speakers that are Robert Frost himself and the entity which we call nature or process. His poems are the reflection of the inner dram of poet’s self, the lone watcher of stars and woods. His poems “Hyla Brook”, “The death of the Hired man”, “Home Burial”, “Two Look at Two” and many others are the dramatic expression on different themes concerning man and nature.

In the poem “Two Look at Two”, we see two lovers in isolation with nature. The theme of the poem is the closeness which man and nature can achieve. If we go through the story we will see how finely the poem is dramatic. The atmosphere created in the poem is very dramatic

The two lovers go deep in nature; there come two dear. The two dear notice theme as stand still. As the lovers stand still, the male dear asks in the following ways:

“Why don’t you make some motion?”

“The Death of The Hired Man” is an impressive poem which is the example of Frost’s dramatic quality. The poem is a dramatic dialogue with narrative verse. The themes of this poem are mercy and justice with a simple country couple in the role of judges. The poem starts with dramatic settings:

“Mary sat musing on the lamp-flame

The whole poem is a conversation between Mr. Warren and Mary, We will see the dramatic quality of the poem:

“Did he say anything?

“The Death of The Hired Man” starts in this way of dialogue making and sometimes the dialogue seemed dramatic monologue.

Part of a moon was falling down the west

Dragging the whole sky with it to the hills

Warren, she said, “he has come home to die”

You needn’t be afraid he’ll leave you this time

The dramatic beginning of the poem comes to an end dramatically. The last two lines make us sit still:

Dead, was all he answered?”

“What is it you see

From Up there always for I want to know”

Her husband attempts to console her. But as the poem concludes, Amy prepares to leave the house. Though the husband says that he’ll follow and bring her back by force. I will….”

“A servant to Servants” is another remarkable poem which is the  example of Frost’s use of dramatic technique. The poem is a dialogue based one, but it is a speech of person and appears as a dramatic monologue.

Frost dramatic technique is finely drawn in the poem “West Running Brook”. Some critics say that it is the poem of poet’s ideas and themes. The dialogue reveals their husband and wife differing approaches to life. The wife’s opening speeches indicates here attitude to life and introduces the major symbol the brook. She states in the following ways: 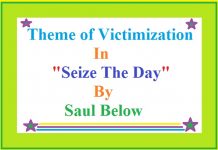 Theme of victimization and Isolation in Seize The Day 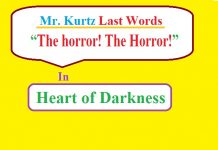 Last Words The horror! The Horror of Kurtz in heart of darkness by Joseph Conrad

Theme of victimization and Isolation in Seize The Day

Last Words The horror! The Horror of Kurtz in heart of...